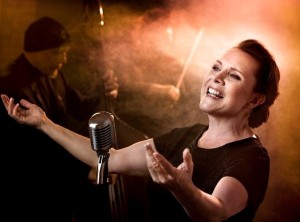 Vaya Con Dios is a musical group from Brussels, Belgium founded in 1986 by lead singer Dani Klein, contrabassist Dirk Schoufs, and Willy Lambregt. Their name is Spanish for “Go with God”.

Dani Klein, the lead singer, and Willy Lambregt had previous success in the band Arbeid Adelt! and decided to form the band Vaya Con Dios together with contrabassist Dirk Schoufs, because their interests were with gypsy music, jazz and opera which are genres which they felt were underappreciated in Brussels.

Their first single “Just a Friend of Mine” has a Latin feel to it and became a big hit in France, selling over 300,000 copies. Willy Lambregt left the group and was replaced by Jean-Michel Gielen. Even though Vaya Con Dios had success in Latin countries, they remained largely unknown in the Netherlands partially due to being a Belgian band, but also because of their gypsy style. In the Summer of 1990, they finally broke through in the Netherlands with “What’s a Woman?” peaking at #1 for three weeks, thus making Vaya Con Dios the second Belgian artists to have a #1 hit in the Netherlands; the first being Ivan Heylen in 1974. The song is about the difficulties of men and women who on the one hand need one another, yet sometimes have a difficult time understanding each other.

In 1991, Dani Klein and Dirk Schoufs decided to go their seperate ways and from then on the group consisted of only Dani Klein singng with various musicians. On 24 May 1991, Schoufs died of an AIDS-related illness, which he contracted due to his heroin addiction. Even though they were no longer a team, Dani was very saddened and the third album Time Flies is much more melancholic than the previous albums.

Even though the music and the composition of the band changed, Vaya Con Dios remained popular in large parts of Europe, especially France, Germany, and Scandinavia, until 1996, when Dani left the music business complaining of too much stress. She returned in 1999 as singer in the group “Purple Prose”, also the title of the début album that same year. Vaya Con Dios returned in 2004 with a new album called “The Promise,” released on an independent label.

In November 2006, Vaya Con Dios released a new album called ‘The Ultimate Collection’. It’s a CD and DVD of the acoustic concert in Brussels (Belgium) at 31 August 2006.