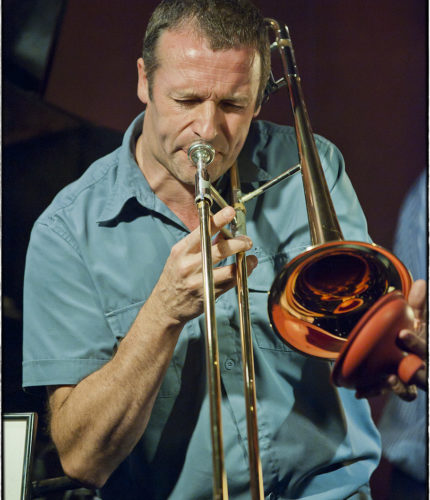 One of the pillars of jazz in Belgium is back to the Village ! Mr Phil Abraham has taken part in more than fifty albums, won many prizes and has played with Michel PETRUCCIANI, Charles AZNAVOUR, Claude NOUGARO, Clark TERRY, Hal SINGER, Toots THIELEMANS, Paolo FRESU,John LEWIS, Lou BENNETT, Didier LOCKWOOD, Dee Dee BRIDGEWATER, Michel LEGRAND, …. Phil Abraham also devotes his career to teaching, training courses and master-classes. He is now a jazz and trombone teacher at the Brussels Royal Conservatory and at the National Conservatory in Douai (France). Last CD recorded in New York for Challenge Records. The essence of jazz music, humor included…

JAZZ AT THE  MUSIC VILLAGE

and located at the very heart of Brussels. The Club offers some 100 seats. Though the Club offers the possibility of wining and dining, it is in the first place a concert hall and not “a restaurant with good music”… We guarantee the musicians (all true professionals) an attentive audience.The public is composed of both jazz connoisseurs and non-connoisseurs.The Music Village is happy to have brought back to Jazz music a large number of spectators who had been alienated from it by 2 frequently mentioned obstacles:

“jazz music is for connoisseurs only”

“jazz is free and incomprehensible”.

We expect musicians who wish to perform at the Club to respect this general concept and to choose the more accessible (to a large audience) songs from their repertoire,

without denying their art and creativity, obviously.