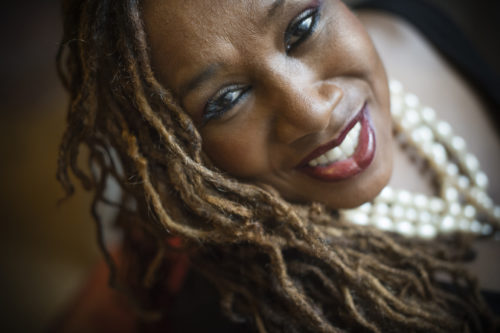 About : Denise King was born and raised in West Philadelphia and is the third of five children. She was “discovered” by a friend who heard her singing outside of her home and introduced her to the world of Jazz performance.

That meeting would forge a work relationship that has spanned twenty years. Denise has mastered the art of making a song her own no matter what the genre. Over the years, she has shared the stage with or opened for such greats as Roy Hargrove, The Brecker Brothers, Phil Wright, Cecil McBee, Christian McBride, Dexter Wansel, Orrin Evans, McCoy Tyner, Bobby Watson, Lonnie Plaxico, Uri Caine, Sid Simmons, Dr. Guy Ramsey, J.D. Walter, Derrick Hodge, Chris Beck, Billy Paul, Jean Carne, Celine Dion, Bunny Sigler and the list goes on and on.

With a voice described as velvet smooth she captivates you and holds you with every note. In this age of auto-tune, quick fixes and artistic gimickry, her love of people, performance style, and energy have ensured her a spot in the Jazz community for a long time. She sings pop and jazz standards with touches of the blues, soul and even gospel in a voice steeped in a sophisticated, swinging, sometimes soulful, satin style. Ms King has sung at almost all of the top clubs in Philadelphia, several in New York, Paris, Turkey, Brazil, Africa, Germany and Japan during the past 20 years.